An Interview with the 2014 Best of Show Winner - Brightline Interactive and Erik Muendel, CEO / CCO 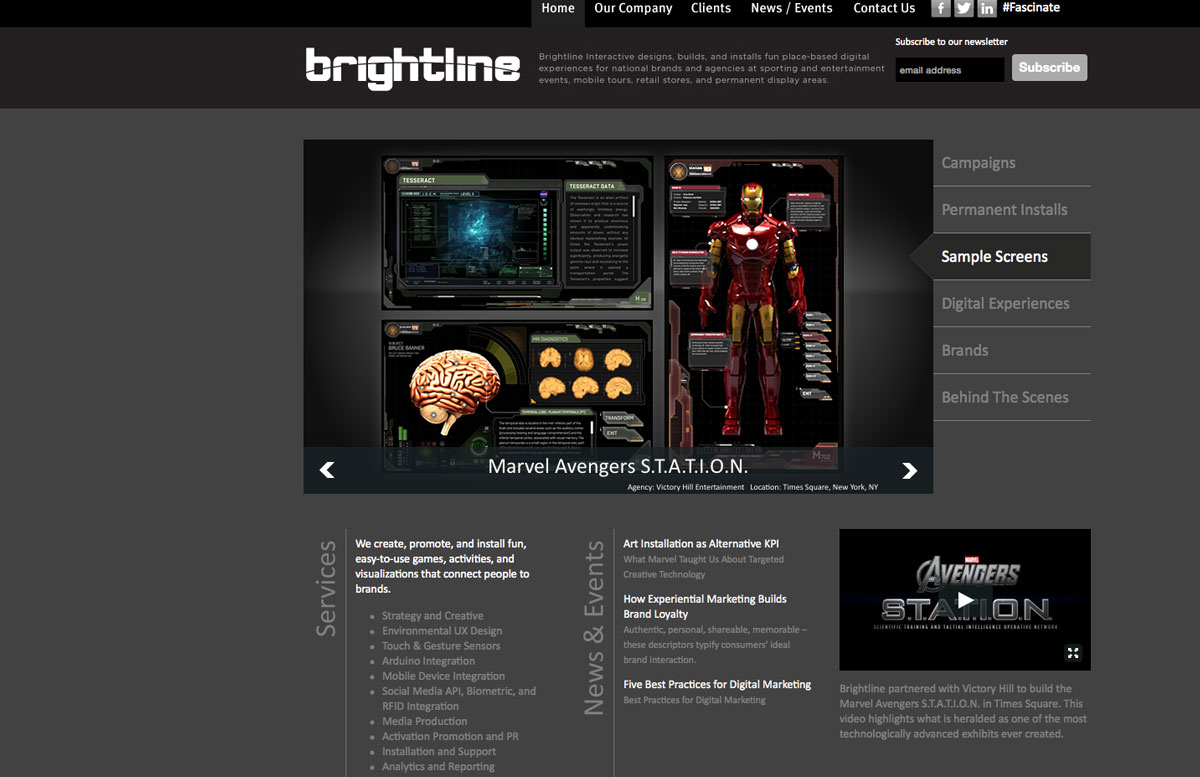 This year’s Best of Show Winner was selected from the 2014 Horizon Interactive Awards Interactive Display category and was won by Brightline Interactive from Alexandria, VA. The project was the Marvel Avengers S.T.A.T.I.O.N. display which was created for Victory Hill Exhibitions and was on display in Times Square, New York City.

With us today, we have Erik Muendel, CEO and CCO from Brightline Interactive to discuss the outstanding work and the Best of Show award.

HIA: Erik, so what does it mean to your company and team to receive this award distinction?

Erik (Brightline Interactive): This is a great honor for the Brightline team. We take a lot of pride in the innovation and brand expression of our work. In this case, as sort of a digital art installation on steroids, the Avengers S.T.A.T.I.O.N. delivered beyond expectations. This award validates all of the tireless work. With 10,000 square of activation space at the Discovery Center Times Square, it was quite protracted. (laughs)


HIA: Tell us more about this project and the back-story that led up to the great work.

Erik (Brightline Interactive): This was the most ambitious project we’d handled on so many levels. The Marvel Avengers franchise features some of the most high-tech gadgets throughout the film franchise, so to align ourselves with that brand really forced us to dial up both the creativity, innovation and technology. We used several new technologies including brain and retinal scanners, LEAP robotics and gesture sensors, to bring the expectations from the films to life and while under an accelerated timeline. The Brightline team worked countless hours, often around the clock, to put this activation together. Ultra fans and casual fans alike were thrilled, and creator Stan Lee was our biggest fan! (laughs)


HIA: Is there anyone else you want to recognize for this award?

Erik (Brightline Interactive): I’d like to thank our Chief Technologist, Jason Powers and Senior Producer, Mike Todaro. This exhibit had so many technological nuances, some of which we used for the first time, and they were able to seamlessly integrate them all into an incredible experience. Without them and the rest of the team, none of this would have been possible.


HIA: Tell us more about your company. Talk, if you would, about how it started, how it has grown, what changes you have seen in the company, etc.

Erik (Brightline Interactive): In 1999, I established MouseUp Media – a multimedia design, development and production firm – which in 2004 became Brightline Interactive. What began as a small interactive shop focusing on strategic government communications has evolved into a national leader in experiential and interactive marketing. We’ve doubled in size in just the last year, allowing us to take on more ambitious projects for the biggest brands on the biggest stages. What speaks volumes is that through all our growth and changes, we’ve been able to maintain our vibrant company culture and stay true to ourselves.


HIA: What types of projects do you normally work on?  Tell us a little more about your clients needs (if you can disclose).

Erik (Brightline Interactive): We’re in the business of reimagining technology for consumer brand experiences. Meaning, we’re using technology to transform an ordinary experience into a unique and memorable one. That can include projects using virtual reality, robotics, and touch and gesture sensors, among others. Each project is specifically tailored to the needs of the brand and aligns seamlessly with their values and brand DNA. We are brand storytellers first, but happen to tell those stories through emerging and immersive creative technology.


HIA: How will you continue to produce industry-leading work?

Erik (Brightline Interactive): Our team never stops learning and experimenting. We’re constantly testing out the newest cutting-edge technologies and finding ways to integrate them into unforgettable experiences for brands. Working with global clients, we’re allowed to be ambitious and push the creative limits for ultimate disruption.

Erik (Brightline Interactive): Ha, several things, but I’d say it ultimately comes down to the commitment of our people. The time commitment, of course, since in the end advertising is a service business. Also, we invested in top strategic, technology, production and creative talent, people who are culturally adapted to think big and win.


HIA: Speaking more generally, what trends are you seeing in the industry and how digital / interactive media is evolving. Clearly, even in public interactive exhibits, there is a convergence of all sorts of media into one immersive experience.

Erik (Brightline Interactive): There are several that come to mind, but two that really stand out are sensor integration and virtual reality. Sensor integration is allowing brands to infuse a dynamic element into their experiences, taking ordinary objects and integrating a sensor to engage a creative twist into the experience. Probably the hottest technology out there today is virtual reality which we’ve been deeply involved with this year. Virtual reality allows brands to immerse consumers from new points of view and expand the scope of the branded experience. Brands want to incorporate several layers of interactivity into their activations to create the most memorable experience for consumers and the most dwell time, creating stories that they will tell themselves through social media.


HIA: Have you entered the Horizon Awards in the past and if so, what do you feel is the biggest benefit from being a participant in the competition.

Erik (Brightline Interactive): We’ve actually won several Horizon Interactive Awards dating back to 2006, but this is the first time we’ve been named Best of Show. We continue to participate in this competition because it gives us a platform to showcase our work against other creative and innovative agencies from around the world. It’s pretty special when you can measure your work among that kind of competition.


HIA: Do you have anything else you would like to add to the interview?

Erik (Brightline Interactive): I just want to thank the Horizon Interactive Awards for this tremendous honor. I appreciate the opportunity to expand on Brightline and share a bit about what makes us special.

HIA: Erik, thank you very much for taking the time to talk more about this award. We sincerely wish you the best in the upcoming year and hope to have you back in future competitions.