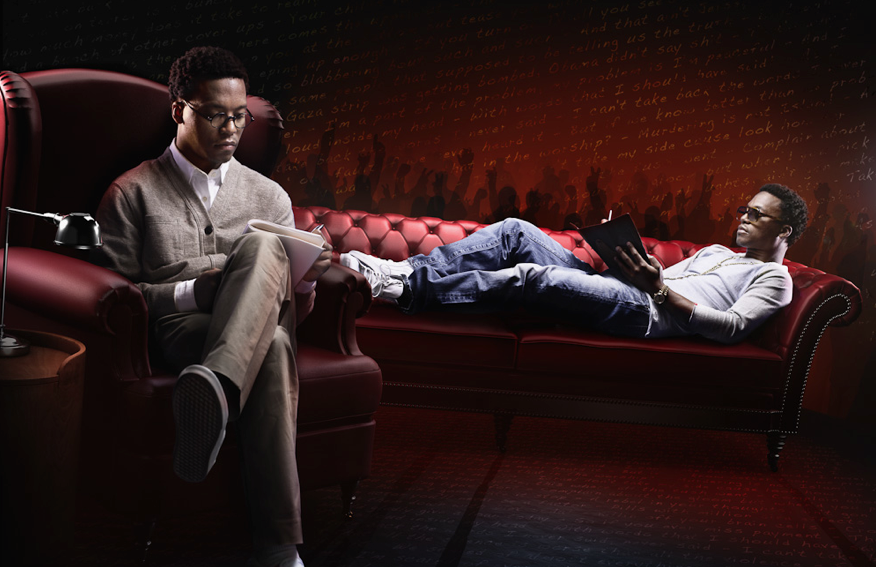 As marketing and digital publishing is transitioning from traditional desktop computer delivery to more portable mobile and tablet experiences, many designers and developers of interactive content are leading the way.  One such leader is Alexx Henry of Alexx Henry Studios. We invited him to talk about the 2011 Best of Category Mobile App, “Digital Fiasco.”

Alexx, thank you for taking the time to talk with us!

ALEXX: Thanks! It’s my pleasure.

HIA: So tell us a little about you and your company.  Specifically, what types of work you regularly produce, industries, solutions, how you got into the business, etc.

ALEXX: In the past several years we’ve evolved from a still photo studio to producing motion and interactive. We made the jump to motion when I saw that technology was emerging that would dramatically change how the publishing industry distributed. It became clear that, in the near future it would be more compelling for print publishers and advertisers to publish to a digital medium, and one that would almost certainly support motion as well. This created a new opportunity: to develop print-like content that used motion.  Interactivity became a natural progression. We now identify ourselves as a “Creative Lab” and focus on where creativity and technology intersect. Our passion as visual artists is in telling stories and using the technology to give meaning. As creative tech explorers, the world is an untapped mine.

HIA: Can you give us a background of the project, “Digital Fiasco,” and tell us a little about the overall objectives, creative inspiration, background, etc. 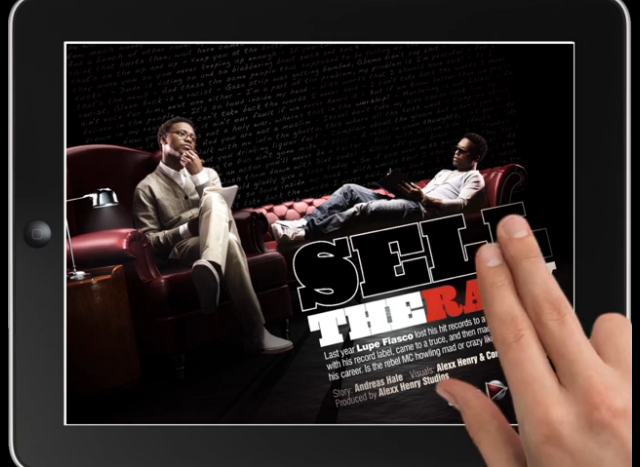 ALEXX: I had the opportunity to shoot Lupe for the Source, which meant that I was going to be out of pocket will all my expenses. If I’m going to shoot anything, especially if it’s an investment, it had better be worthwhile. So I took the gig because of the creative control it gave me over the project.

Lupe seemed like the perfect artist to explore the motion magazine with. He was willing, and extremely collaborative. There was some great drama that he had gone through to get his album release and I wanted to capture some of that drama in a way that was unique to Living Art. He had just been through a roller coaster ride with his record label, who shelved his album, when an outpour of support from his fans brought it back from the brink. There was this one point where he’s in a stand off with his label; they wanted to dictate what songs he was going to do for the album, and he’s like: they had nothing to do with my first albums success, why should they puppet my follow up? His stand was an all or nothing, take it or leave it, David/Goliath deal. He was literally ready to walk away from the music business.  We shot one of the Living Portraits where he’s staring down the barrel of the camera, almost full face, in this poker stare-down. It’s powerful and he’s holding his own; but there are these subtle micro expressions and blinks that seem to betray him a little, showing his confidence is not 100%. It’s a subtle thing, but it’s comes across in a way that it never could as a still portrait.

HIA: Based on the project objectives, was it successful and why?

ALEXX: Hells yeah. That’s where I really started to explore the Living Art potential with micro-expressions, and body language in motion. It opened up a huge world for me as an artist working in this medium.

HIA: We are constantly seeing an emphasis on providing content via tablet and mobile devices. What do you see for the future of web development knowing that there is this trend?

ALEXX:  I’ve always thought that if you’re a storyteller, it’s your job to use whatever technology is at your disposal to get your vision across. The magazine may be in decline, but it will give way to other media that can do a better job and communicating an evolved form of that idea. Tablets are a great start down this path. I love publishing for tablets, because it is a perfect hybrid of captivation and interactivity. It’s described as a “lean back” gizmo, which is really a broadcast term for leaning back on your couch and getting fed content directly to your fat, dumb opium receptors. But when you can a lean back and interact in a way that’s meaningful so that it penetrates some of the more creative centers of the brain, then it becomes a very powerful medium.

HIA: Talk a little about the digital publishing industry.  Specifically, we have noticed that traditional print publications are turning more and more to an all digital delivery. What are some of the advantages of this?  Will print go away altogether?

Alexx: Print, as in ink and paper won’t disappear altogether, but it will become much more niche. I still collect and listen to vinly records; I won’t listen to Kind of Blue any other way, but I’m not going to spend 25 bucks on a 180g Bieber jam, that’s what Spotify/itunes is for (yeah, I said Bieiber Jam). Print will be similar. People magazine will eventually make the decision that paper editions don’t make sense, but Art-Douche-Quarterly with its lush 11x16 black and white spread will always have a market for the traditional.

HIA: Tell us about your work environment. What’s on your desk?

ALEXX: I’m in the process of moving into a new studio so there’s a bit of sawdust on my desk at the moment. But on a good day:

My Workstation with a 27” and large wacom.
My Leica M6 in case I’m so inclined.
Mac book Air with the web and email.
Iced green tea. Or a Latte. Or a glass of Redbrest 15 if it’s been that kind of day.

HIA: What do you do for fun when not developing interactive media?

ALEXX: This is the fun stuff. My life and my work are constantly intersecting so most of the time I’m trying to puzzle out the next project even if I’m sitting in a movie theater. Of course, I can always take my motorcycle out for a good long ride.

HIA: So, where do you/your team turn for inspiration?

ALEXX: I’m constantly searching for other ways people are using tech to be creative. There are a few blogs that I scour, and some talented folks I like to keep tabs on. Besides that, I like to turn to traditional sources for inspiration; I’m a fan of classic art and literature and occasionally dip into some of the great achievements that have stood the test of time.

HIA: What does it mean to win the Horizon Interactive Award?

ALEXX: It is a big honor, and I’m grateful to be recognized by you guys. As an artist, I’ve always been a storyteller; photography was my medium, but I’ve been careful not to over-identify with it. I’m grateful to be working in a time where there is so much great technology to use and outlets like yours to help recognize the work.

HIA:  Do you have anything else you would like to add to our interview?

ALEXX: For a 20% discount on a subscription to Art-Douche-Quarterly, just go to their website and type BIEBERFEVER at checkout.

HIA: (Laughing...)  Thank you again for taking the time to be a part of our developer spotlight.  We have enjoyed sharing more information about the great work you produce and look forward to having you back in the 2012 competition. Best of luck to you now and down the road!  If you would like to know more about this outstanding app, you may visit: http://www.alexxhenry.com/digitalfiasco/