First and foremost, the Horizon Interactive Awards would like to congratulate Shoot to Kill Media on their 2011 best of category win with the promotional video “Fancy Sauce.”  In this developer spotlight, we will learn more about the project and the producers of this award winning video. Shoot to Kill, thank you for taking the time to talk with us!

STK: How long is this going to take? We need to pick up our dry cleaning.

HIA: Ha ha... you guys have a great vibe about your work and great personality! That's refreshing!  Sorry for the more standard questions in this interview... next time we'll go outside the box a little.  So tell us a little about your company.  Specifically, what types of work you regularly produce, industries, solutions, how you got into the business, etc.

STK: We formed Shoot to Kill in 2008 after working together on a Pepsi funded project that they couldn’t afford to keep afloat. When that project went south, we sat down and created our new venture.

The Nightlife and DJ phenomenon in Las Vegas really kicked off around the same time, so at the outset, our clientele was primarily nightclub based. However, it didn’t take long for us to start getting tapped to produce commercials for the same casinos and music videos for the DJ’s who were playing in them.

We all come from a skateboarding background, so our earlier work mostly involved punk rock bands and Warped Tour performances. It didn’t take long for us to recapture that clientele and continue working in the genres we really enjoy.

HIA: Can you give us a background of the project, “Fancy Sauce,” and tell us a little about the overall objectives, creative inspiration, background, etc.

STK: The Palms Casino and Resort has been our longest client and they generally don’t get too involved in our creative process after they ask us to produce something. This gives us a lot of breathing room and confidence in knowing that we’re going to be able to hand in an amazing product without corporate intervention.

Fancy Sauce was to be their new Tuesday night event in Moon Nightclub. We took our inspiration for the style of the piece from Darren Aronofsky’s editing techniques in “Requiem for a Dream”. 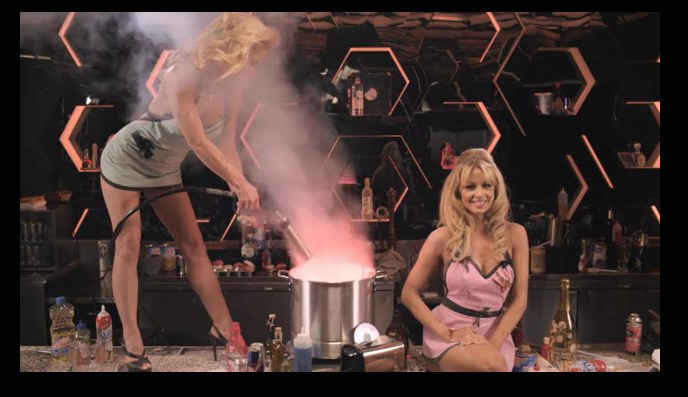 HIA: Based on the project objectives, was it successful and why?

STK: The Palms is one of the few venues that actually understand the importance of a well-crafted product. Even when budgets aren’t what they should be, all we ask of each other is that the final edit is something people are going to watch in awe.

After we released the commercial, which aired on Comedy Central and E! almost all of our meetings started with the client asking for a piece “similar to Fancy Sauce”.

HIA: Over the past 10 competitions, we have seen video become an important part of marketing plans.  Can you talk about how you see video from a marketing perspective and how it has evolved over the past few years?

STK: There’s no doubt of its importance. It’s essential to any company and has definitely started to elbow its way in to areas where things like print campaigns and photo shoots used to dominate.

With the invention of the “Viral Video”, we’re seeing a lot more clients looking for that Million View status. Not to mention for the money you spend to advertise in a magazine for a week or two, you can advertise a video online indefinitely.

However, the flipside is that everyone is a filmmaker these days. You truly need to wade through endless links to get to anything meaningful. Market Saturation doesn’t even begin to describe what’s happened to things like music videos in the last 5 years.

Luckily for us, we have creativity on our side…and looks. We’re all really sexy.

HIA: I'm sure you are. (Laughs) - Where do you see video for web going in the coming years?  Do you feel that video will be even more important to communicate marketing messages?

STK: Sure, but we definitely should be keeping our eye on things like public art installations and performance art as well. Despite being documented and released as viral videos, these forms of marketing are also growing in popularity. We have Banksy to thank for that.

HIA: We actually have a Mr. Brainwash poster in our office.  Great work and nice reference! The "Exit Through The Giftshop" documentary has been favorited on our Netflix play list.  So, where do you/your team turn for inspiration?

STK:  I would imagine we go to the same places everyone else in our industry does; independent films, literature, music, art and pop culture. Oh and there’s a website called theinspiration.com that’s really amazing.

HIA: What does it mean to win the Horizon Interactive Award?

STK: It’s a great feeling to be recognized for something you truly worked hard on. In addition to the Fancy Sauce award, we also received “Best in Show” for the tour visuals we designed for Paul Oakenfold.

So for those who don’t know, that’s TWO awards. Two times to social status and two times the amount of women who will want to friend us on Facebook.

HIA:  Ok Ladies... the facebook link is - http://www.facebook.com/shoottokillmedia Yes. You did win 2 "best of category" awards.  We'll do a follow up on that project as well.  That's a testiment to your work and how strong it was in this competition.  Do you have anything else you would like to add to our interview?

STK:  “A little sincerity is a dangerous thing, and a great deal of it is absolutely fatal” -Oscar Wilde.

That's a great quote! Thank you again for taking the time to be a part of our developer spotlight and for sharing your sense of humor.  We have enjoyed sharing more information about the great work you all produce and look forward to having you back in the 2012 competition. Best of luck to you now and down the road!