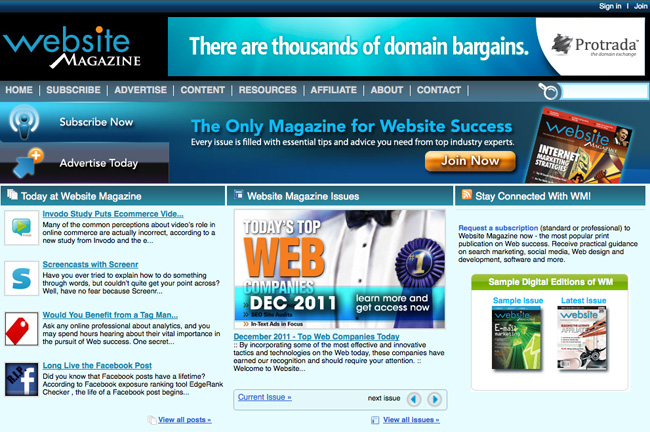 Around the 4th or 5th Horizon Interactive Awards Competition, I was searching for a way to reach a large number of interactive media developers.  I ran across the Website Magazine and instantly realized that not only was the audience a perfect fit for our needs, but the information and articles were spot on.  I later met Peter Prestipino at a conference in Chicago where they were exhibiting and got to know him a little better.  I wanted to interview him to find out more about the Magazine and how it got its start as well as where it will be going in the future.

HIA: Peter, thank you for taking the time to talk with us.

Peter: It’s my pleasure – it’s not often the tables are turned on me (I’m usually the one doing the interview) so this should be interesting.

HIA: Tell us a little about your background... how you got started.

Peter: I’ve been involved in Web business for well over a decade – nearing fifteen years actually. I started in college designing websites and over time developed an interest in (some would say obsession with) Internet marketing. My first job out of college was as a search marketing specialist. I’ve been interested in technology and business for as long as I can remember, so the Web – which combines elements of both obviously - was a perfect fit for me professionally. I learned as much as I could about paid search advertising, Internet marketing, application development, analytics and pretty much everything in between. Over time I became sort of a jack of all Web trades – something which I have been advising others to do as well for the past several years.

HIA: Tell us how the Website Magazine got its start.

Peter: There were two catalysts for the magazine. The first was that the publications that were available at the time (2005) were doing a relatively poor job in my opinion. They would focus on the news within very specific areas but failed in providing their readers  any actionable advice on what they should be doing or how to do it. The second catalyst was that at the time, there was still a lot of money being poured into print and we knew that coupled with our Web experience – something which other publishers had little to no experience in – we could capture some of that advertiser activity. And we did.

HIA: What is the main focus and purpose of the magazine content?

Peter: I believe our editorial focus is what separates Website Magazine from the dozen other competing publications and hundreds of thousands of online publishers. The focus of the content has always been to educate our readers, creating awareness of important techniques and trends. Instead of covering venture capital funding or new hires, every issue of Website Magazine features several actionable ideas that our readers can use to improve design, increase conversions and drive revenue. In my position, I aim to produce a magazine that subscribers need to read, because if they don’t, they know their competition will.

HIA: How has the magazine been doing?

Peter: In one word – exceptional. When we started out in late 2005, industry folks were puzzled at why we were producing a print publication in a digital-focused world but we knew there was a need and our research over time proved accurate. We have consistently grown revenues and are coming off our best year yet. One of the main reasons we did so well this year was the introduction of my first book Web 360: The Fundamentals of Web Success. It helped to double our paid subscriptions and we’re really pleased with that.

HIA: What have been the challenges over the last few years with maintaining the magazine and growing the readership?

Peter: We’re not immune to the challenges faced by any website. We care about growth of unique visitors and pageviews, time on site and managing feedback loops as much as anyone else.  Maintaining an active and loyal readership/audience is our core challenge however and that requires we always focus on the value we can provide first and foremost. When we do that well – everything else falls into place. The book is an excellent example of this in action.

HIA: What are the goals for the future development of the magazine?

Peter: In 2012 Website Magazine will be focused on expanding its coverage areas beyond the world of the Web exclusively. Mid-year 2012 we expect to launch several specialty publications which are focused on applications as well as the emerging daily deals market. Website Magazine will also be publishing my second and third books over the next few months. Our goal is to keep providing value to readers, keep driving awareness and conversions for advertisers and generate some revenue for the business in the process.

HIA: I recently downloaded the iPad app and now get my magazine in digital format. Where do you see the future of digital publishing as a whole as well as where that fits in with the Website Magazine.

Peter: It is the responsibility of publishers to publish information in the way in which it is consumed by the intended audience. If that’s on the Web – great. Print? That’s great too. Applications for mobile devices and tablets remain a relatively new phenomenon on the whole but the magazine has had these features for many years now. We knew that our readers, many of whom are of the tech-savvy, first-adopter variety, would look to us for apps and they did and we’re glad we have them now. I believe there will always be a place for print publications, but the most sophisticated publishers know that the future is digital and that is where future investment should be without question.

HIA: How do people subscribe to your magazine and what are the costs?

HIA: You all are also very active with your daily blog and on social media. Talk about the importance of generating content through multiple channels.

Peter: Very active might be an understatement! Both blogging and social media are a core aspect of our acquisition efforts. Blogging is something we do every day – and something we recommend others find a way to do as well. Our search engine traffic has grown steadily since our inception and content is responsible for driving a majority of the subscriptions to Website Magazine. Social media is far trickier. It’s a powerful tool for driving awareness and decent at driving website traffic, but the real value is the opportunity to create a community and over time bring new users in. It’s enjoyable to be on Facebook, Twitter and Linkedin but it requires a very formal strategy and lots of attention to make it work.

HIA: You recently agreed to support a special award in our 10th anniversary competition.  What are your thoughts about the Horizon Interactive Awards?

Peter: I’m privileged to see a lot of amazing things on the Web each and every day. The downside to that of course is that so much is out there for consuming that it’s common to miss things that deserve greater attention and exploration. What HIA does really well, and one of the reasons we’re so excited about the special award, is that it showcases those that are designing and developing in thoughtful, compelling and effective ways. It’s something that is fundamental to Web success and something Website Magazine is excited to be a part of.

Peter: Good luck to all the nominees and may the very best win!

HIA:  Peter, thank you taking the time to talk with us about the magazine as well as your support for the special award in this year’s competition.  I know that I always look forward to the articles you all put together and I am hoping that the participants of the Horizon Interactive Awards will to.  You can learn more about the Website Magazine at their website:  www.websitemagazine.com / twitter: @websitemagazine