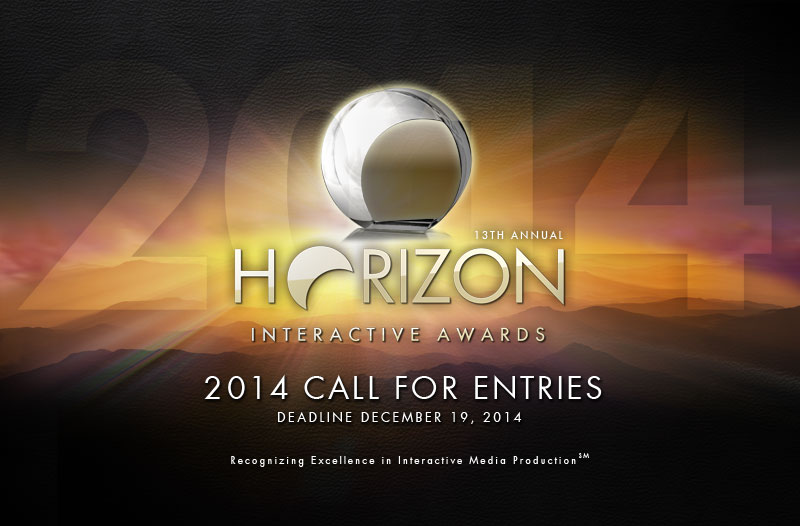 The 2014 Call for Entries is now open. The Horizon Interactive Awards has a rich history of recognizing excellence in Interactive Media Production awarding the best web sites, videos, online advertising, print media and mobile apps. Enter now for your chance to be recognized as one of this year's best of the best! Deadline to enter is December 19, 2014.

For 2014, we're excited to announce a new award distinction for Agencies who receive multiple Horizon Awards. For the first time, we will award one "Best Agency" award, one "Best Agency Runner-up" award and any agency receiving four or more Horizon Awards will be given the "Distinguished Agency" title. As a distinguished agency, your work will be included in the special Distinguished Agency gallery on our website as well as have access to exclusive promotional tools and Horizon Interactive Awards hardware.

Over the past 12 years, the competition has seen thousands of entries from nearly all 50 US States and many countries from around the world. The goal of the competition is simple: To give credit where credit is due and highlight the great work from all of the talented designers, developers and producers of interactive media across the globe.

Judging begins after the deadline to enter and will be completed by April 2015. Winners will receive a complimentary matted certificate, press release, website badge and promotion on the Horizon Interactive Awards web site. Winners also have the opportunity to take home some great hardware with any one of our custom designed winners statues made entirely of solid glass crystal.