The Future of Web Design is Here… and Now! 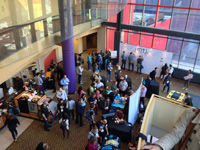 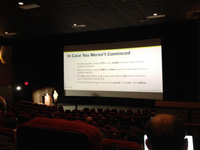 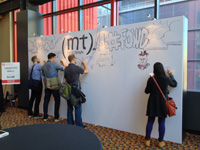 In the heart of New York City, a city known for its rich American history and forward thinking innovation, web developers and designers from all over the globe gathered for a look forward into the web development industry at the 2013 Future of Web Design Conference.  The conference was hosted at the AMC Empire 25 Theater in Midtown Manhattan, the site where Abbot and Costello first performed in 1935. The informative presentations were featured on the “big screen” adding to the impact of each topic and providing a comfortable atmosphere for attendees. Amidst the alluring aroma of endless buckets of movie theater pop corn, 2 very large theaters were utilized for the discussions on various topics ranging from responsive web design to the psychology of design to how to design for 508 compliance.

Day one’s Keynote presentation set the tone for the rest of the conference. Khoi Vinh, former design director at the New York Times and named one of “The 50 Most Influential Designers in America,” discussed how designers should focus on designing for specific users in mind saying, “the more specific you can get with your user, the better the design will be. If you’re building something for everyone, you are really building it for no one.” This was a very important reminder for any designer or web developer who undoubtedly must deal with the “group think” from time to time which leads to a watered down version of an overall web experience.

This important theme of “user first” was carried out through the various sessions which focused not only design, but the emphasis of great content as the foundation for design. Introduced was the concept of “mobile first” thinking where designers should consider how to simplify the content and build designs that support the high-distraction user to complete various tasks. It was noted that today’s web user has the attention span of someone reading a billboard but is generally presented with content with the depth of an annual report. This sense of complexity does the user a disservice. When dealing with content and designing an experience with mobile first thinking, one presenter posed a very poignant rhetorical question, “If  you don’t need it on the small screen, do you really need it on a large one?”

Responsive web design was also discussed in many sessions as not just a fad, but it was an aspect of good design for the future. As browsing environments become less predictable, designers need to think about their design in terms of independent elements that are formatted differently based on the device viewing it. One additional aspect to responsive design that was discussed was the emphasis of not just viewing a site on other devices, but using sites on other devices. The experiences for users are often very different from device to device and just because a site is responsive, doesn’t mean that the experience of using a site is optimized for that device. 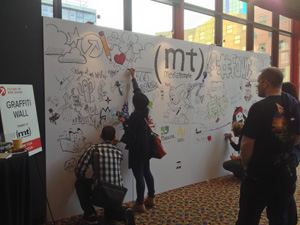 The conference wasn’t just about diving into in-depth conversations about design theory and coding principles. There were elements of fun and a chance to be creative.  Conference sponsor Iconfinder challenged attendees to tweet pictures of environmental icons for a chance to win gift certificates. Designers were also invited to express their artistic side through the “Graffiti Wall,” sponsored by Media Temple. By the end of the first day of speakers, the wall was filling up with creative sketches and unique artwork.

In addition to the much appreciated breaks for fun, “speed networking” sessions provided opportunities to make new relationships in the industry and share ideas with colleagues while sipping on a gigantic movie theater soda pop.

According to the Future Insights group, the conference was a huge success and feedback from all attendees was overwhelmingly positive. The format of the conference provided something for everyone. There were many opportunities to dive into the thick of coding how-to’s while providing a strategist inspiration to develop forward thinking ideas and concepts for their business or development team. The event staff was very hospitable and the ever present array of snacks and refreshments right outside the theater entrances made for a very comfortable and casual environment to let your mind wander into the depths of the topics being discussed.

If you are interested in attending the other Future Insights events, the following opportunities are coming up: