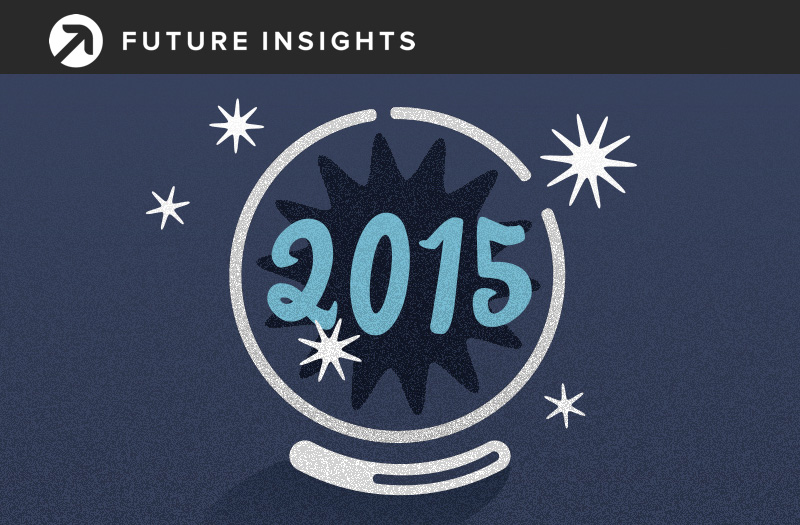 Yes, it’s that time of the year when literally everyone is reflecting on the past year and making their predictions and resolutions for the year ahead. Being Future Insights, we like to think we have our fingers on the pulse, and also feel we have more of an obligation than most to do some crystal ball-gazing.

These aren’t visual design “trends” per se, but some of the over-arching themes, technologies and practices we think will be big in web design in 2015.

Now that we’re all (mostly) down with the whole idea of responsive design, it’s time to focus on performance. Your user base accessing your site from mobile devices is already big and only going to get bigger. While connection speeds are improving all the time, they’re still playing catch-up, and a 3G connection isn’t going to beat a desktop anytime soon. You need to make sure you’re giving your mobile users a great, fast experience, and the best way to do that is to design for performance right from the start.

Leading industry figures like Dan Mall, Brad Frost and Tim Kadlec are already talking about how to design for optimum performance, and Yesenia Perez-Cruz gave a great talk on the subject at Future of Web Design NYC this year.

2015 will see a greater awareness of performance budgets and designers imaginatively creating fast-loading sites that still delivery a punchy experience.

Flat design has been around for a while now, born partly as a reaction against skeuomorphism, which led to a focus on simplification, and partly as a necessity in order to design sites that would perform well for a new generation of mobile users (see above). While there is a huge amount of fantastic design in this style, a common criticism is that much of it look the same.

As technology and connection speeds improve, I predict that in the coming year we’ll see less of an obsession with flat design and more of a focus on the right design for the right job. This article illustrates perfectly why debates around flat versus skeuomorphic design are pointless.

In the past year we’ve seen the rise and rise of SVG and browser implementation of the HTML <picture> element, both of which are paving the way for improved graphics capabilities on the web. With CSS shapes and blend modes now widely supported (in newer browsers, at least), you’ll soon have all the capabilities of Photoshop right in your browser.

This will result in designers experimenting with creating richer, more immersive experiences with images on the web as many of the former constraints are lifted.

Sara Soueidan has written some excellent articles on how to get started with SVG. Here is a recent article from Smashing Mag.

In 2014 the case has been made by CSS animation experts Val Head and Rachel Nabors for careful consideration of UX when it comes to web animations. Just because we can animate something doesn’t mean we should.

5. The Death of Parallax

Ok, well, not quite death exactly. But parallax sites, which looked cool to begin with, began to face a backlash this year due to uneccessary over-use. Users are getting a little tired of their scrolling being hijacked, and designers are starting to abandon this once-trendy style in favour of a better, focused user experience.

Parallax is sometimes okay but, as with animation, it needs to be a carefully considered design decision, not viewed as an add-on for cool points. Creative Bloq features some examples of parallax done well.

With a new release and a stylish new website, 2014 was the year that Sass really came into its own. The preprocessor has grown enormously in popularity and is fast becoming an essential component in any front-end developer’s toolbelt, with fantastic community support and a whole host of libraries and frameworks.

Sass could also benefit your workflow as a designer: Laura Kalbag wrote a series of articles on how to get started with Sass if you’re a designer, not a developer.

Although media queries are great, essential, even for responsive design, element queries enable finer control and could be the next evolution. I predict we’ll be hearing a lot more about them in 2015. Read more here.